Some Insects Have the Gall to Deform Plant Structures

Find this article at:
go.ncsu.edu/readext?309911
— Written By Renee Strnad and last updated by Kristin Wing

Some insects have the gall to deform plant structures 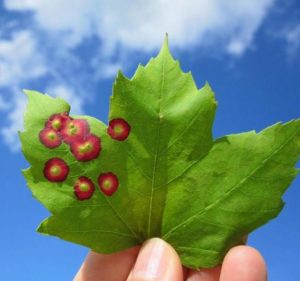 Have you ever seen an abnormal swelling or structure on a plant that normally shouldn’t be there? It probably caused you to scratch your head and wonder what was going on. And if it’s on an ornamental tree in your yard, you probably thought that swelling did not look so swell. It’s possible you were looking at a gall – a condition of abnormal cell development and enlargement caused by insects or other organisms.

To form a gall, chemicals are released by the insect into the plant. These chemicals manipulate the way the plant grows, altering its structure to benefit the insect. For example, they may cause changes that provide nutrients or shelter needed for survival. They say a change would do you good, but in this case, a change does the insect good! Galls come in many shapes, colors, sizes, textures and longevity. Many are so characteristic that one can determine the causal insect/agent just by looking at the features.

While there are many kinds of gall-forming insects (e.g., aphids, wasps, midges, beetles, sawflies, adelgids), they are typically species specific, meaning they cause gall formation in a specific species or group of plants. For example, the larvae of the maple eyespot gall midge (a small fly) form round, often reddish, “bulls-eye” patterned galls on the leaves of red maples (pictured). No other organisms will cause that and the midge typically does not infest other tree species.

Galls can be seen on any part of the plant: leaves, flowers, twigs and branches, shoots, main stems and buds. But not to worry—despite the alarming appearance, galls typically cause aesthetic damage only. Because they cause little or no harm to their host plant, management is typically not recommended.