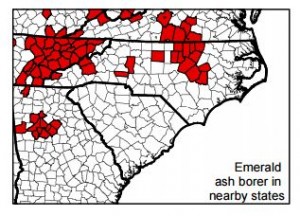 RALEIGH – Agriculture Commissioner Steve Troxler signed an emergency order today expanding the quarantine for emerald ash borer to include the entire state, following the discovery of borers in several more counties across the state.

“We have surveyed the state to see if we could find evidence of this highly destructive pest in previously undetected counties,” said Agriculture Commissioner Steve Troxler. “Our staff have now turned up evidence of emerald ash borers in the central, eastern and western parts of the state, including areas near the borders with Virginia, Tennessee and South Carolina.”

The quarantine allows for the in-state movement of hardwood firewood and plants and plant parts of the ash tree, including living, dead, cut or fallen, green lumber, stumps, roots, branches and composted and uncomposted chips. However, movement of these items outside the state into non-quarantined areas would be prohibited. Firewood that has been treated, certified and labeled in accordance with federal regulations can be moved outside the quarantine area.

North Carolina becomes the 15th state in the country with a statewide quarantine. The beetle was first detected in the United States in Michigan in 2002. It is responsible for the death or decline of tens of millions of ash trees across the country.

“This is a devastating pest to ash trees, eventually killing the trees where the insects are found,” Troxler said. “We are not surprised to find more infestations in the state, particularly along the borders with Tennessee and Virginia, two states where borers have previously been found. Virginia also has a statewide quarantine in effect, and Tennessee has quarantines in nearly half of its 95 counties.”

The Plant Industry Division and the N.C. Forest Service are working in cooperation with the U.S. Department of Agriculture’s Animal and Plant Health Inspection Service. Contact the USDA State Plant Health Director for more information on federal quarantine regulations and firewood certification at 919-855-7600.

Emerald ash borers overwinter as larvae. The adult beetle is one-fourth to a half-inch long and is slender and metallic green. When the adults emerge from a tree, they leave behind a D-shaped exit hole. The larvae can also create serpentine tunneling marks, known as feeding galleries, which are found under the bark of the infested trees.

Home and landowners are encouraged to report any symptomatic activity in ash trees to the NCDA&CS Plant Industry Division hotline at 1-800-206-9333 or by email at newpest@ncagr.gov, or by contacting their local N.C. Forest Service County Ranger. To find your county ranger, go to http://ncforestservice.gov/contacts/contacts_main.htm. Rangers can also suggest treatment options for homeowners.

The pest can affect any of the four types of ash trees grown in the state.