So, What Is the Orange Stuff on My Pine Trees?

Find this article at:
go.ncsu.edu/readext?457957
— Written By Colby Lambert and last updated by Kelley McCarter

Spring has sprung in most of North Carolina, bringing about many changes in the woods. The dogwoods are blooming and so is fusiform rust (or sporulating). You may be wondering exactly what is fusiform rust? Fusiform rust is caused by the fungus Cronartium quorum f. sp. fusiforme, and produces bright orange spores in the spring on southern yellow pines, especially loblolly pine. 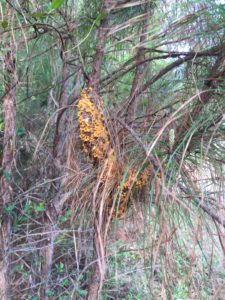 These spores are produced on pines usually from late-March through mid-April. Like many rust diseases, fusiform rust requires two hosts to complete it’s lifecycle and oaks, such as willow, water, and laurel, are the secondary host. The disease is much less conspicuous on oaks, and normally does no harm to them. The disease produces a different kind of orange spore on underside of the oak leaf from late-April to mid-June. These spores are blown back to the pines where the disease causes galls and cankers that can weaken the tree, reduce it’s value for timber, increase wind susceptibility, and cause death.

Loblolly and slash pine are the most susceptible pines to the disease. Longleaf is moderately resistant and shortleaf is highly resistant. Because the disease weakens the trees, secondary pests can become an issue. The weakened condition of the tree can cause secondary infections by the pitch canker fungus (Fusarium moniliforme var. subglutinans), black turpentine beetles (Dendrodoconus frontalis) and coneworms (Dioryctria spp.) causing further damage to the trees reducing value and possibly death.

Control methods for fusiform rust include spraying fungicides in a nursery setting. Plant shortleaf or longleaf pine in areas with a history of high disease incidence, and in areas with low or moderate disease incidence, increasing tree populations at planting have been recommended. Pruning branch cankers and removing diseased branches can help lower stem infection potential. Once the stem is infected, branch pruning is not recommended. Diseased trees are not a direct risk to the surrounding healthy ones, since spores that infect pines come only from oak leaves. Loblolly and slash pine improved seedlings from state and private nurseries offer better rust resistance and improved growth and should be used in place of natural regeneration methods. 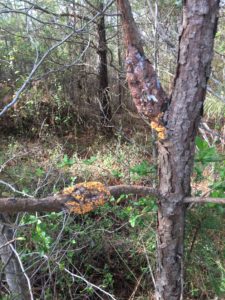