Find this article at:
go.ncsu.edu/readext?476953
— Written By Renee Strnad

The insect that is dubbed “the most destructive forest pest in the South” does not look nearly as ominous as it is. Smaller than a grain of rice, the southern pine beetle is small but packs a big punch. The devastation it is capable of causing is massive, with outbreaks easily costing in the millions of dollars of lost timber and management costs.

Fortunately, outbreaks do not typically occur. The southern pine beetle is what is called a “cyclical pest,” meaning we expect an outbreak to occur every 10-15 years. But when an outbreak does occur, the sooner we know about it, the better our chances of keeping damages to forests and managed timber stands minimal. 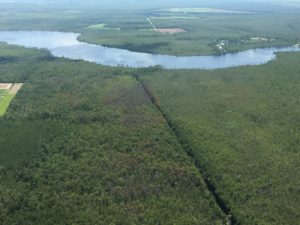 This year, traps across the state came back with “Decreasing or Low” populations levels expected. Essentially, in those areas, the checkered beetle is expected to keep the southern pine beetle in check and we do not anticipate any outbreaks. However, three areas in the state came back with “Increasing” populations levels expected, meaning more southern pine beetle than the previous years is expected.

All three areas have an increased likelihood of southern pine beetle spots showing up. Because of this, the N.C. Forest Service has heightened awareness and may increase surveys in the areas.

If you suspect you have a southern pine beetle spot on your property, contact your county ranger with the N.C. Forest Service. They can provide diagnostic and management recommendations for your forestland. For more information on expected southern pine beetle activity in North Carolina, visit our recent Forest Health Note on the topic.