Predicting the Start of the Pine Pollen Season

Find this article at:
go.ncsu.edu/readext?592038
— Written By Robert Bardon and last updated by Kristin Wing 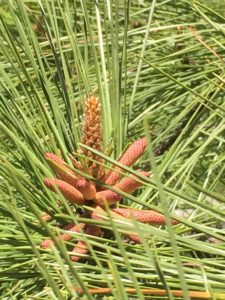 Have you been caught off guard again? It is that time a year when pine pollen begins to coat cars, sidewalks, outdoor furniture, and other surfaces. This yellow film of pollen is necessary for the production of pine seeds that grow to become pine trees. Without this pollen, pine trees could not reproduce to provide us the trees we depend on for the building of our homes and other daily uses of wood. In North Carolina, the pine pollen season is a reminder of the importance of the pine tree to our state, that it supports the forest industry, which has a $32.8 billion dollar impact on North Carolina’s economy.

To determine when the pine pollen season will begin and when the trees will be producing the maximum amount of pollen one needs to estimate the number of degree-days above 55o Fahrenheit after February 1. To determine degree-days, add the positive differences between the daily high temperature and 55 degrees. When the total degree-days sum to approximately 300 degree-days we begin to see the pine tree releasing pollen. Once a sum total of 636 degree-days is reached, pollen production is at its peak. In the Raleigh area pine pollen production is just beginning, and if the weather pattern holds, it should reach peak production by mid-April.