Find this article at:
go.ncsu.edu/readext?612093
— Written By Colby Lambert and last updated by Robert Bardon 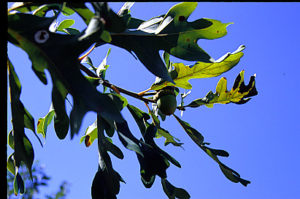 Recently, Extension agents and specialists have been receiving calls from folks in southeastern NC regarding oak trees dying or declining. Most of the callers indicate that the tree’s leaves turn brown and begin to fall off within a few weeks. So, what may be the leading cause of the decline and or death of the oak trees in the region?

This part of the state has recently been in abnormally dry or under moderate drought conditions for the past few months. Prior to that, hurricanes Matthew and Florence had inundated the area with record rains. This area of the state received upwards of 100+ inches of rain in 2018, and both storms left trees under water for days or weeks. From record rains and wind to now a drought, we can begin to identify the potential leading cause of the decline and or death of oak and other trees in the region.

Flooding, brought on by the extreme weather can lead to damaged root systems. Trees root systems are made up of both major lateral roots that are woody and form the support system of the tree and fine roots that are non-woody and are involved in absorption of water and nutrients to support the trees life functions. Flooding can cause damage to tree roots in several ways, but saturated or flooded soils are usually the main cause of the damage brought on by the lack of oxygen in the soil. Roots require oxygen to carry out cell functions and they get their oxygen through absorption of oxygen from small air spaces in the soil. The lack of oxygen in the soil leads to death and decay of the roots that are utilized in absorbing water and nutrients, resulting in a loss of root mass. Even if the water wasn’t standing above ground, doesn’t mean that the water didn’t “stand” below ground. Depending on how long the soil was inundated with water, tree root damage can be extensive. Stagnant water can be worse on tree roots than flowing water, since stagnant water is often depleted of oxygen. Contaminated flood water can also adversely impact tree roots, and depending on the contaminate, the severity of damage could show up quickly or take months or years to affect the tree. High winds as well as swift flowing flood waters can loosen the tree’s root system and can lead to root death and decay, and loss of root mass. Loss of root mass can leave the tree prone to other factors that can cause stress for the tree.

When the tree experiences flooding, and its root mass is reduced in size due to death and decay, it becomes more susceptible to other issues such as the abnormally dry or moderate drought conditions that we have experienced over the past few months. So, the decline we are seeing in oak trees now are likely the result of the impact flooding had on the root system and the added stress brought on by the lack of water under the current dry conditions. Trees need water just like us, and the lack of a root system to obtain adequate amount of water from the soil ultimately can lead to the trees decline and death.