Treatments for the Invasive L. dispar Begin in Western NC

Find this article at:
go.ncsu.edu/readext?801814
— Written By Kelly Oten

This month, the N.C. Department of Agriculture and Consumer Services is beginning treatments for Lymantria dispar (formerly known as ‘gypsy moth’) at sites within Surry, Buncombe, Yancey, and McDowell Counties. The four areas targeted for treatment include:

To treat these areas, low-altitude fixed-wing aircraft will disperse moth pheromone via a product called SPLAT GMO. This inundates the area with the pheromone, resulting in the male moths being unable to detect pheromones released by the females. This decreases mating success and subsequently reduces moth populations the following spring. Pheromones are chemical communication signals that are species-specific; therefore, the treatment is not harmful to humans, animals, or plants, and it will not affect other insect species. 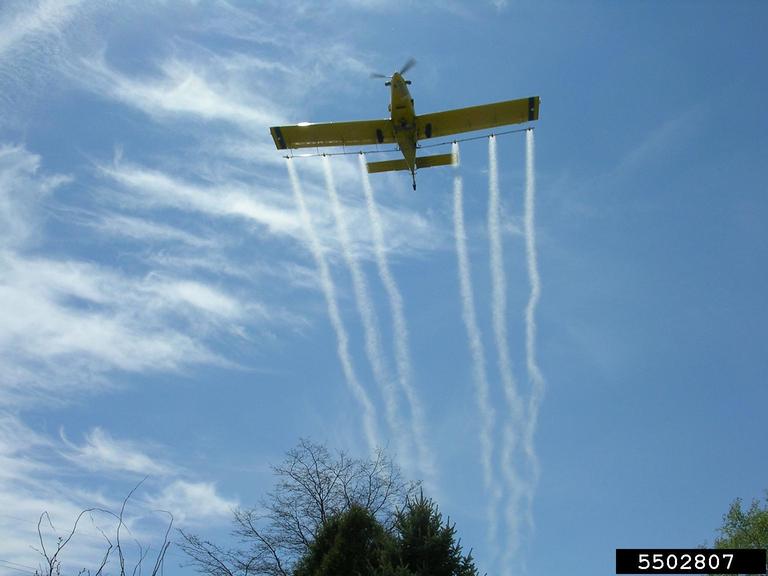 In addition to these four sites, in mid-April, a treatment was conducted in Buxton (Dare County) that targeted caterpillars. 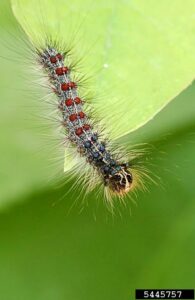 L. dispar caterpillar is hairy with 5 rows of paired blue dots followed by 6 rows of paired red dots along its back. They feed on the foliage of over 300 species of trees and shrubs. Image: Jon Yuschock, Bugwood.

L. dispar is a non-native invasive insect that feeds on the leaves of over 300 different species of trees and shrubs, predominantly oaks and other hardwoods. Heavily infested trees may be completely defoliated, leaving yard trees and entire forests more susceptible to attacks from other pests. Severe infestations that occur year after year often lead to tree death. These caterpillars can also pose public health concerns for people with respiratory problems. In areas with high-density L. dispar populations, the caterpillar hairs and droppings may cause severe allergic reactions.

Native to Europe, L. dispar was introduced near Boston, MA in the 1860s and has been a problem in eastern hardwood forests since. NCDA&CS has addressed spot introductions of the moth across North Carolina since the 1970s.

For more information, or to request treatment notification via text or email, visit the NCDA&CS website or contact NCDA&CS toll-free at 800-206-9333. Updates, including spray start dates, will also be posted on Twitter at @NCAgriculture.

We also have a few other email lists you can subscribe to.